This year will be my 50th Christmas. I’m now at a point in my life where Christmas is very different, and not just because it’s the first one taking place during a pandemic when we have new traditions like wearing a festive mask or, for those who refuse to wear a mask or take reasonable precautions, picking out which grandparent you’re willing to do without next Christmas. 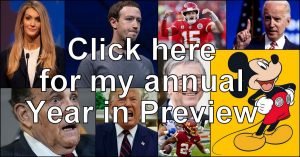 “Well, I ain’t no spring chicken!”

“Hush, and open your gift.”

“Aww, just what I’ve always wanted — a do-it-yourself will kit.”

Of course, I don’t remember a lot of my early Christmases, especially the first couple where I just sat around in my diaper and poured a shot of tequila into my bottle when no one was looking. I slept very well as a baby, by the way.

I don’t recall many specific toys, but I know Santa Claus came to see me back then. I remember some fat bearded guy creeping into the house with a bag. Wait a minute. That was August. Never mind.

As I grew up, the Christmas gifts progressed from things that rattled to action figures to “Star Wars” sets to video games (think Asteroids, not Assassin’s Creed) to clothes to accessories for my first car.

“Hang this from your mirror and it’ll kill that cigarette smell from the previous owner.”

I can’t remember much about the holidays in my 20s, except that I spent an awful lot of time working just before, right after and sometimes during Christmas. Then I had a son. And there’s nothing that compares to seeing Christmas through your child’s eyes.

You bend over backward to help Santa make Christmas perfect. One year Santa brought my son a little air hockey table. I was heartbroken on Christmas Eve when I opened it and saw a gigantic crack in the top of the table. Santa had to leave a note on official North Pole letterhead about how Dasher had gotten a little wild on the roof and broken it but that it could be swapped at a store for one that wasn’t broken. I expected Saylor to be crushed, but he thought it was hilarious that Dasher was causing Santa headaches.

Those are the kinds of things I remember from Christmases long ago — things like the excitement, the stress, the food and the music, including when my rock-n-roll uncle would grab his guitar and sing a silly song about the ridiculous gag gifts everyone got at an annual gathering of extended family on my mom’s side. We won’t be making that trip this year due to COVID. And COVID took my uncle in September.

COVID also means Saylor won’t be home for Christmas. He’s stuck in Scotland, where he’s been studying for the past two and a half years. There are worse places to be stuck, I guess, but it definitely leaves a hole in my heart this holiday. Kids grow up, and your Christmases with them change, but the pandemic has made it a little too abrupt. Seeing Christmas through your children’s eyes just ain’t the same on Facetime — even less so when they’re not children anymore.

Fortunately, I’ve got a couple of young grandsons whose Christmas morning will be chaotic joy. By nighttime they’ll be utterly exhausted after playing with the toys they won’t remember when they’re 50.

And their Pop will relax in front of the fireplace with Nana and a drink and some holiday jazz — the kind of “old people” Christmas night that makes kids cringe at the thought.

Give it 50 years, kids. You’ll come around to the idea. I promise.