(Photo: The corner of my writing room — no guitar smashing allowed.)

When I browse Sirius XM satellite radio, I keep finding myself on channels like 70 on 7, 80s on 8, The Beatles Channel, Classic Rewind, Willie’s Roadhouse, Soul Town and similar stations that play music from when I was younger — a vague period of about half a century — and the music before I was even me.

Sometimes I chill out with some jazz, listen to sports talk, catch a little bit of what passes for national broadcast news these days — or say the heck with all of it and just tune to comedy channels.

What you don’t see on that list is new music. Every now and then some new artist will pass through all of the filters of downloads, chatter and critical acclaim, garnering a listen, such as Billie Eilish. That listen is usually followed by a firm, “I’ll pass,” from me even in the case of Eilish who gets bonus points for the having the actual middle name “Pirate.” That’s right — her name is Billie Eilish Pirate Baird O’Connell, which I’m sure all 200 million folks younger than I am already knew, but I just learned today while Googling how to spell “Eilish.” If she’d change her stage name to Pirate O’Connell, I might give her another listen.

Sometimes, I’m confronted by modern “music” against my will, such as when The vowel-challenged Weeknd performs at the Super Bowl or when there is a musical guest on SNL. Back in the day, musical guests included folks like James Taylor, Paul Simon, George Harrison, Jimmy Buffett, Chuck Berry, Willie Nelson, David Bowie, Miles Davis, Elton John, Norah Jones and a lot of talented folks. In the first two episodes of 2021, I was confronted by Machine Gun Kelly and Phoebe Bridgers.

While Machine Gun Kelly looks like one of two prison escapees we’re always on the lookout for and his music is about as pleasing to the ear as, well, a machine gun, Bridgers looks like a sweet little girl in her Halloween jammies who was about sing a lullaby. Nope, just some weird out-of-tune screeching followed by the smashing of a guitar. How original.

A lot of folks felt the guitar smashing was inappropriate or lame. I, however, was offended by the destruction of a perfectly guitar because I don’t like to waste money, whether it’s a guitar, a truck or food.

I know what so many will think: “You’re just old and out-of-touch, Chris Johnson!” To which I respond, “Duh!” I can’t help the old thing, but I’m rather OK with being out of touch if this is the kind of mess folks want me to touch. Eww. No thanks.

Which brings me to the Rock & Roll Hall of Fame. Nominees have been announced, and you can vote on your five picks from a dubious list of 16 on their website. I was rather stunned to see Tina Turner and Carole King as options. How are they not already in the Hall? Carole King wrote the 1960s!

I bet 50 years from now, some guy will be chilling out in his self-flying car and griping about modern music while switching to Sirius’ Machine Gun Kelly Chillout Channel and wondering why Phoebe Bridgers isn’t in the Hall of Fame on his way to a concert. I also predict that concert will be the Rolling Stones.

p.s. — I couldn’t even find five nominees to vote into the Hall. I settled on four: 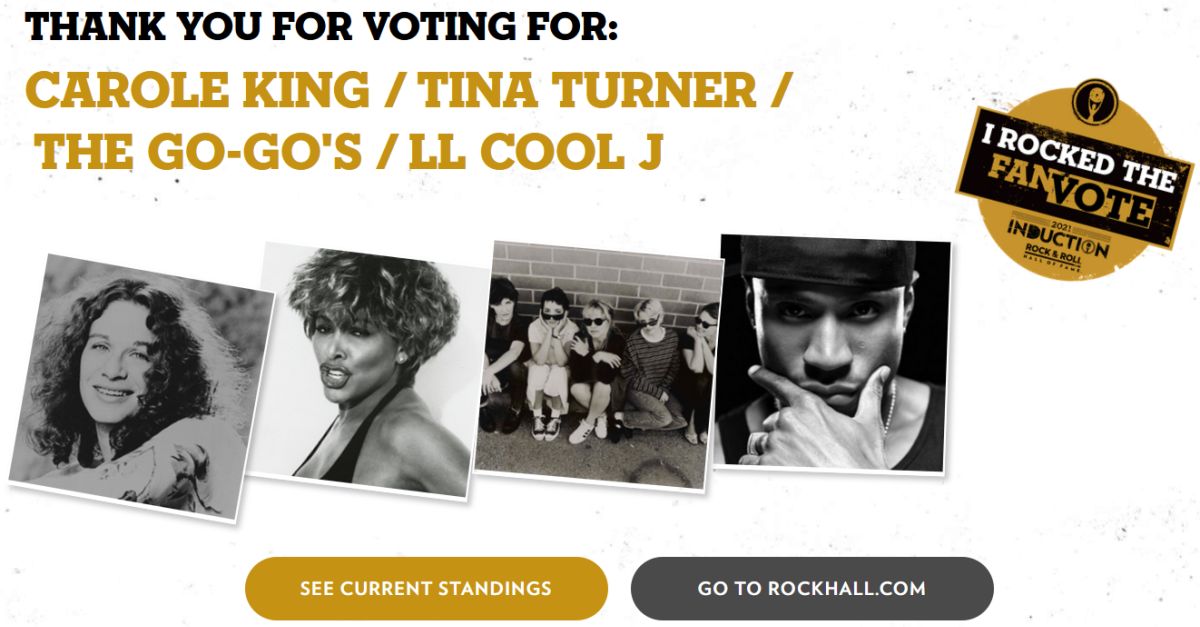 The Rock & Roll Hall of Fame’s roster is debatable, but some of the performances at the induction shows are legendary, like Prince shredding on George Harrison’s “While My Guitar Gently Weeps.”