More than once I’ve voiced my opposition to ties. They serve no purpose other than lightly strangling conformists — or severely strangling them in the case of folks like CBS Sports broadcaster Verne Lundquist (pictured above), who had to retire from calling SEC football games and the NCAA Tournament due to a lack of oxygen getting to his brain.

Next week’s column mentions my war against the tie. It’s a war I feel like I’m winning until somebody dies and I have to wear one to a funeral, generally giving my face the same color as the deceased. Otherwise, my neck is generally free, and plenty of oxygen reaches my brain on a daily basis. This gives me an unfair advantage against so many male conformists that I try to even the playing field by killing a few brain cells with tequila. That makes us even, but I still win because I’m more comfortable.

When I die, I’d rather be cremated than buried. I like to be magnanimous and say it’s because I don’t think it’s right to take up space on this Earth when I’m not really here any more, but it’s probably because I’m just haunted by the thought that someone might put my body in a suit and tie for all eternity. It’s not that they’d want me to look spiffy — it’s just that the strangling tie would ensure that I’m truly dead from suffocation.

I’ve already made it clear to my wife that there will be no ties allowed at my memorial service someday. I’m even debating whether to allow shoes — although flip-flops are perfectly acceptable. Ties, though, will be cut off at the door, just like they should do at any reputable barbecue joint.

All this started with a quote from Karl Lagerfeld that surfaced after he died yesterday: “Sweatpants are a sign of defeat. You lost control of your life, so you bought some sweatpants.” 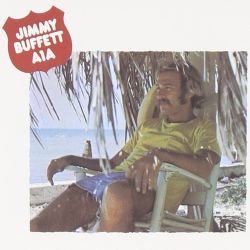 And conformity, to me, does not seem to be the hallmark of a fashion icon. Then again I appreciate the fashion of folks like Jimmy Buffett, as seen here on the cover of what many Parrotheads consider the definitive Buffett album — “A1A,” named for the highway that dead-ends in Key West.

So, take my fashion advice with a grain of salt … just like I take my margaritas.