I’ve always been more of a words guy than a numbers guy. I think numbers are from the devil himself. For instance, they say “666” is the mark of the beast. See? Numbers! If words were from the devil, “Larry” might be the mark of the beast. Or maybe “Harold.” Even on “Sesame Street,” they use a vampire — the undead, for crying out loud — to talk to kids about numbers. This is clearly an evil trick.

That makes perfect sense, and I’m OK with that. If someone is sicker than I am, I definitely want them first in line. Still it would have been nice to know if my quarantine was really necessary. Therefore, I’ve officially changed my name to Idris and have been working on my 3-point shooting so that I might have a better shot at finding out what I have, or had, or might have tomorrow. If those options don’t work, I may have to run for Congress to get a test.

I was also told by my doctor that even if I tested positive for coronavirus, there was really nothing they could do about it except treat severe symptoms, none of which I had. All that getting tested could do is confirm it and contribute to the officially tally of those with the virus. Again, that makes perfect sense.

The problem is that government and media folks keep reporting numbers of confirmed cases as if that is a number that is worth more than a warm bucket of hamster vomit, which it is not. People with zero symptoms are walking around with coronavirus. Young and old have it. Kinda sick and slightly sick folks have it. And hardly any of them are getting tested.

Sometimes the “official” numbers are reported without the caveat of “confirmed cases.” Anytime you hear that number, multiply it. Then multiply it some more. In fact, they should just quit using numbers altogether because, as I pointed out earlier, numbers are evil. They should just report “a whole bunch of cases” and “a whole lot more on the way.”

There are a lot of folks out there who hear something like “Turnip County has one case of coronavirus,” and think, “What’s the big deal? One case?” Um, there ain’t no such thing as one case anywhere, even in Turnip County. Or they hear “Georgia has 287 Covid-19 cases.” Yeah, right. You don’t test many folks, you don’t find many folks with it. Funny how that works. Sure makes it a lot easier to convince folks we can go about business as usual.

I don’t know how to fix the problem of too-few tests. A couple weeks ago, Vice President Pence was touting that millions of tests were going out. I assume they all went to Toledo or something. They apparently didn’t go to Georgia.

My doctor’s office did finally get their hands on a total of 10 tests. Somehow. I assume they met some trenchcoat-wearing guy in an alley after he said, “Psst. Got some high-quality coronavirus tests over here.” But, again, I wasn’t sick enough to get a test.

Until we can confirm who’s got what, I guess we are all just gonna have to keep being careful. And when you hear the numbers of cases, “confirmed” or otherwise, remember that all of these numbers are complete bunk.

p.s.: See if you qualify for a coronavirus test … 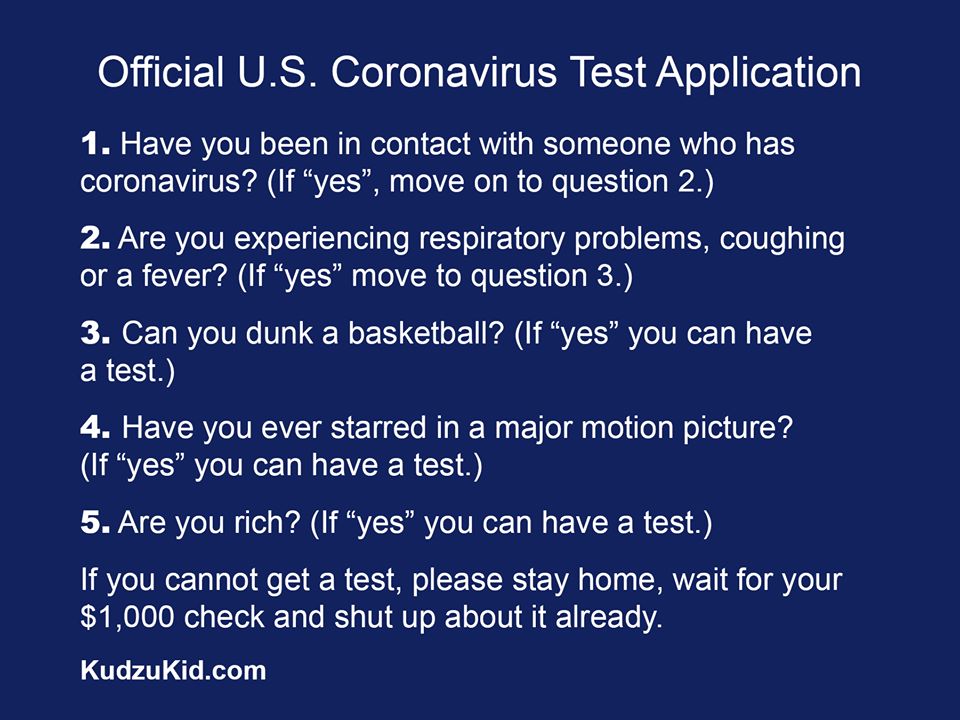